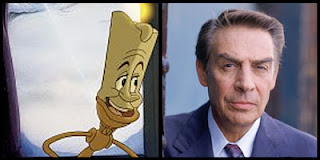 Jerome Bernard "Jerry" Orbach (October 20, 1935 – December 28, 2004)
American actor and singer, he was well known for his roles as Detective Lennie Briscoe in Law & Order from 1992 to 2004, Harry McGraw in the hit series Murder She Wrote 1985–1991 and as the voice of Lumière in Disney's Beauty and the Beast.
1992 64th Annual Academy Awards LIVE performance
(If it wont play click here)
Perhaps not as commonly known, Orbach was also a noted musical theatre star. Prominent character roles that he originated include El Gallo in The Fantasticks (the longest-running musical play in history), Chuck Baxter in Promises (for which he won a Tony Award), Julian Marsh in 42nd Street; and Billy Flynn in Chicago.