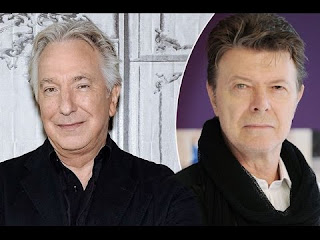 Just this week we lost David Bowie and Alan Rickman to that devastating disease called cancer. It was a sad week in Celebrity world and millions of people around the world reacted on Facebook, Twitter, Instagram and Snapchat to name a few. Why do we mourn people who we have never met so publicly?

Millions attended Whitney Houston's funeral and listened to "I will always love you" as her body left the local church. After Getty Images photographer Chris Hondros was killed covering a Libyan uprising, thousands attended his memorial service. The majority of the audience at each of these funerals attended them virtually which is one of the few things that is changing the way we mourn and how we do funerals in the 21st Century. EVERYONE can be let in to experience this historically private event.

Snapchat, YouTube and Twitter have also made us much more comfortable with sharing intimate details about ourselves online with strangers on a constant basis. Many deaths and funerals are reported, commented on, tweeted, snapped, recorded and posted online before even their loved ones have heard of the news.

According to Famous NYC Funeral Home to the Stars Frank E Campbell 'They (the public) Want Closure'. The funeral home stood as a backdrop to those who came to mourn Heath Ledger in NYC in 2008, as his casket was carried from the home, and the media and fans who came to watch. The intense dedication and unity of the mourners, the familial connections felt for people they have never met, the volatility of grief was apparent for all to see and this is not just reserved for Heath Ledger and his fans but to every "celebrity" or person in the publin arena. "They need to be a part of that life that they ... have never touched personally, individually, privately, and in person — but through the media, through television, through the movies, it was very much a part of their growing up and their life. They want closure," Schultz (director) said. "People from every walk of life."