The One Habit of a Highly Effective Person 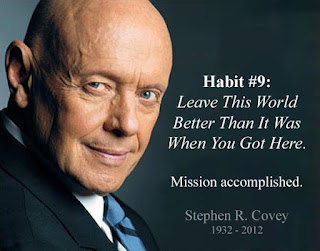 Stephen Covey, of 'The Seven Habits of Highly Effective People' passed away on Monday. A seminar he gave - Imagine the end of your life, you attend your own funeral. Who would be there? What would they say about you? What life would you have lived? (called a Purposeful Life).

“Begin with the end in mind” was one of “The Seven Habits of Highly Effective People” in his best-selling 1989 book.


His wife, 9 children, 52 grandchildren and people from around the world will pay their respects to a highly sung gentleman on Saturday July 21st 2012.