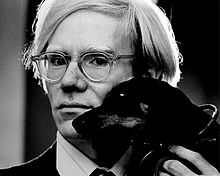 Andy Warhol (August 6, 1928 – February 22, 1987)
Warhol was an American artist who became a leading figure in the visual art movement known as POP ART. He suffered at an early age with a rare neurological disorder and found solace in popular culture and comic magazines.

His works explore artistic expression, celebrity culture and advertisement in the 1960s.

After a successful career as a commercial illustrator, Warhol became a renowned and sometimes controversial artist.

When Warhol died unexpectedly on February 22, 1987, his will dictated that his entire estate should be used to create a foundation dedicated to the "advancement of the visual arts". http://www.warholfoundation.org/

His native city, Pittsburgh, Pennsylvania, houses The Andy Warhol Museum - an extensive and permanent collection of his art. It is the largest known museum in the United States that is dedicated to a single artist.
See more information here http://www.warhol.org/